Skip to Main Content
Alerts
Videos
Parks &
Recreation
Find a Job
The Jule
Connect
with Us
The idea for the park was conceived in 1907 when Charles M. Robinson, a noted eastern park specialist, visited Dubuque. After touring scenic locations in the city, Robinson made this comment to his hosts: "I have never seen a place where the Almighty has done more and mankind less, than Dubuque." Most of his listeners were hurt by the remark, but one person decided to do something about it. He was Judge Oliver Shiras, one of Dubuque's leading citizens.

A citizen's committee was formed in April of 1908, and Judge Shiras was elected chairperson. In June of 1908, with aid from the Civic Division of the Dubuque's Women's Club, one hundred acres were purchased from A.L. Rhomberg. The property was then deeded to the city and became Eagle Point Park. Since the original purchase, seventeen parcels have been purchased or donated, which brings the park to its present size. 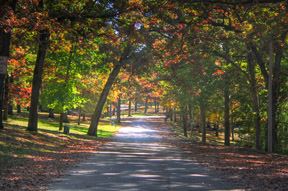 Streetcar traffic began to serve the park in 1912. Union Electric Company constructed the track, turnaround, and waiting station in the area at the park entrance where the eagle statue and flower beds are located. In 1920, a bathing beach was constructed but closed when the lock and dam was built in 1933. The park took on a new look in the 1930s when the City hired Park Superintendent Alfred Caldwell. A $200,000 Works Progress Administration grant was received and the gifted landscape architect began work. His love of Frank Lloyd Wright prairie architecture is very recognizable in the buildings and gardens. Caldwell's exceptional use of native construction materials, craftsmanship and unique designs make the park one of the most beautiful in the midwest. 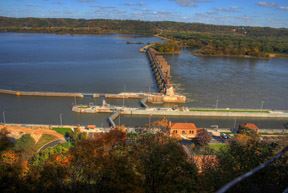 The Riverfront Pavilion showcases a view of
Lock and Dam #11

The Terrance Room, Veranda Rooms, Indian Room and Bridge Complex were built in the 1930s as a W.P.A. project during the great depression. The Riverfront Pavilion, built in 1910, is the oldest pavilion in the park. Riverview walk was constructed in 1950 and quickly became the most popular area in the park. Viewing towers are available to the public, showcasing the panoramic view of Iowa, Wisconsin and Illinois, and Mississippi River Lock and Dam #11. The Shiras Memorial Pavilion is located at the walkway's end and was built in 1921, in honor of Judge Oliver Shiras, the person most responsible for the park's creation. The Log Cabin Pavilion was constructed in 1939 with funds from the National Youth Administration. It overlooks Dubuque's Point area and downtown.

Dubuque’s Eagle Point Park, overlooking the Mississippi River and providing a spectacular view of Iowa, Illinois, and Wisconsin, is one of the most beautiful places in the Midwest.  The park is the “crown” of Dubuque’s park system, which features 49 parks covering nearly 1,200 acres.  Another jewel was recently added to that crown thanks to a generous land donation to the City of Dubuque.  Read more...
Report a Concern
Make a Payment
Contact Us
Notify Me®
[]