You can purchase a Dubuque flag from the City of Dubuque Finance Department, located on the first floor of City Hall at 50 W. 13th Street. Three sizes are available:

In 1967, the Dubuque City Council began a project known as “Operation Flag” after a request from a local Girl Scout Troop to involve the public in a contest to design the official City of Dubuque flag. Both citizens and students at local schools were encouraged to submit their designs for the flag to a jury comprised of citizens. The jury’s criteria for the flag design was as follows: 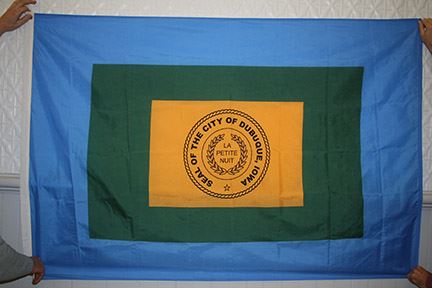 “We realized that our selection must be of such, that it would endure through and ever-changing future, and at the same time resound with the honor of a proud historical past.  It must be of a design immediately recognizable as ‘the flag’ of the City of Dubuque, and of a color that would ‘fly tall’ and significant in its prescribed place on the flag pole. It must be a flag that the citizens of Dubuque would be proud and happy to point out to all as ‘our flag.’ Dubuque is a proud city and the image created, as our flag flutters in the breeze for all to see, must be a proud image.” 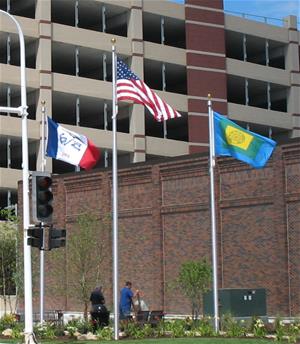 The winning flag was created by Mrs. Maureen Frommelt. She designed the flag with the City’s past, present, and future in mind and represented each with the colors of blue, green, and yellow. The blue signifies the waters of the Mississippi River and its importance to Dubuque’s history. The green symbolizes Dubuque’s present scenic beauty, and yellow represents Dubuque’s bright future. Unifying them all is the official seal in the center of the flag containing the words, “La Petite Nuit,” meaning, “the little night.” This was the Meskquakie Native Americans’ name for Julien Dubuque, founder of the city, and was used in the original registration of the 1788 agreement in which the Fox gave Dubuque permission to mine lead on the banks of the Mississippi.

At the July 3, 1967, city council meeting, the City officially adopted two resolutions: one commending the Girl Scout Troop for their untiring efforts in creating public interest for the design of the official flag, and the second to approve and accept Frommelt’s design as the official flag for the City of Dubuque.
Report a Concern
Make a Payment
Contact Us
Notify Me®
[]