Roy D. Buol is the longest-serving mayor in Dubuque's history.  He was first elected to a four-year term as mayor in November 2005 and was re-elected in 2009, 2013, and again in 2017. Before being elected mayor, he served 10 years as the Second Ward Representative to the City Council.

Mayor Buol is a Dubuque native and a 30-year retired employee of John Deere Dubuque Works. He retired again in 2019 after serving as the Director of the Landscaping & Grounds Department at the University of Dubuque since 2002. Mayor Buol holds a Bachelor of Business Administration degree with a double major in business and marketing from the University of Dubuque, where he also completed graduate coursework toward a Master of Arts in Communication.  Mayor Buol and his wife, Deborah, are parents of four children and grandparents of 10.


During his mayoral campaign in 2005, Mayor Buol’s platform was based on “engaging citizens as partners,” and what he heard from thousands of citizens was a consistent theme surrounding water quality, recycling, green space, public transit, cultural vitality, accessibility, and downtown revitalization.  In 2006, during the first City Council goal-setting session following his election, Mayor Buol proposed and received the full support of his council colleagues to focus on sustainability as a City top priority, stating “cities that get out in front on sustainability will have competitive economic advantages in the future.”  Sustainability has been a top priority every year since his election. This leadership paved the way for the creation of Sustainable Dubuque, a citizen-engaged process to define sustainability for our community and create a national model for cities under 200,000 in population.  In 2009, Mayor Buol was instrumental in the launch of “Smarter Sustainable Dubuque,” a unique public/private partnership between the City of Dubuque and IBM Research, the division of IBM responsible for its “Smarter Planet” campaign. The project was initiated in September 2009 when the City of Dubuque and IBM announced their intentions to make Dubuque one of the first “smarter” sustainable cities in the U.S.

Mayor Buol is past co-chair and past treasurer of the Mississippi River Cities & Towns Initiative (MRCTI) and represents Dubuque on the U.S. Conference of Mayors, National League of Cities, and the Iowa League of Cities.  He is also a member of the University of Iowa’s REACH (Realizing Educational and Career Hopes) Advisory Board. 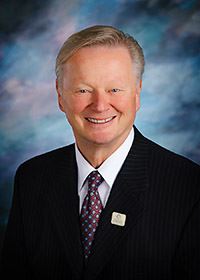 Mayor Buol serves as the City’s spokesperson in multiple venues locally, nationally, and internationally.  He has served as a panelist or keynote speaker at the following:
Since Mayor Buol was elected mayor, Dubuque has been named:

Mayor Buol’s community involvement includes serving as guest host for non-profit fundraisers and speaking to elementary, high school and college classes about the role and function of city government in creating a viable, livable, equitable community for citizens.   He is a member of the Loyal Order of Moose #355, Fraternal Order of Eagles, the Dubuque County Historical Society, the Dubuque Museum of Art, and is a long-time supporter of the Grand Opera House and Dubuque Symphony Orchestra.