Artist's Statement
Victoria is composed of steel. The title references the Latin word for victory. Within the architectural/geologic form exists a seemingly eroded strata giving the impression of a lost triumphant past.

Artist's Bio
Chris Wubbena holds a B.F.A. from the University of Northern Iowa, an M.F.A. with an emphasis in sculpture from San Francisco State University, and is currently a professional sculptor and Professor of Art at Southeast Missouri State University. His work has been exhibited in outdoor and indoor exhibitions throughout the United States, in such exhibitions as Art in Place, Charlottesville, VA; SculptureWalk, Sioux Falls, SD;  The 9th Sculpture in the Park Exhibition, Indianapolis, IN; and A Southern Perspective on Prints: 2005 New Orleans Triennial, New Orleans Museum of Art.  Webbena has also completed a number of outdoor commissioned projects. The public sculpture titled landmarks, commissioned by Butler County Iowa, was completed for the Rolling Prairie Trail in 2008 and the public sculpture titled Forward, commissioned by Mississippi Power Company, in Gulfport, Mississippi was completed in 2007 to commemorate the work done by Mississippi Power employees during and after the events of Hurricane Katrina. 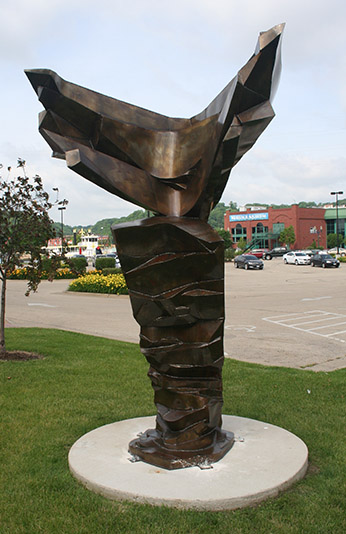