Dubuque's First City Hall
Dubuque's first City Hall was located in small two-story brick building on the corner of Fifth and Locust streets. Begun in 1857 and occupied a year later, the current City Hall was designed by J.N. Moody and modeled after Boston's Faneuil Hall and the Fulton Street Market in New York City.  John Francis Rague, another notable Dubuque architect, prepared the specifications and was the superintendent of construction.

Facilities
The basement, entered from the south side (toward 12th street), contained a jail, several saloons, and fireproof vaults for records. The first floor was a market hall, containing one market stall 22' wide per bay, except on the north (13th Street) side were the three central bays were devoted to entrance and staircase. Each stall was equipped with a gas outlet and stove.

Cast iron brackets placed two-bay intervals support the story above. Once the City Hall was built, the meat market occupied its market floor. Most of the other City markets consolidated themselves on Central and Iowa Streets around City Hall. On the second floor of the City Hall, there was a City Council room at the east end, a general meeting room at the west end, and offices in between.

The third floor was undivided except for a housing at the east end for stairs to the clock tower. The open space could be used for dances or community gathering and in later years as an archery and pistol range for the police department, a bowling alley, and a horseshoe pitching area. The City Hall bell was tolled for various occasions, from church services to fires to the end of wars and to welcome home returning heroes. 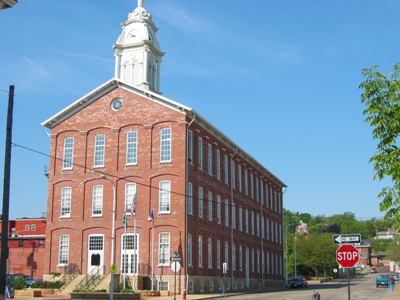 Location: 50 W. 13th Street
Year Constructed: 1857
Architect: J. N. Moody
Date listed on National Register of Historic Places: September 14, 1972
City Hall Bell
With the advent of supermarkets, the City market declined, but to this day a farmer's market continues to be held on Central Street in front of City Hall every Saturday from 7:00 a.m. to 12:00 noon, May to October. City Hall was renovated in 1926, and the bell tower was removed in 1954 due to its deteriorated condition. The bell was placed on display in a plaza on the Central Avenue side of City Hall. The building was renovated again in 1973. After a fundraising campaign, the original bell was installed in a new 47-foot reproduction of the original bell tower that was installed in 1990.
Report a Concern
Make a Payment
Contact Us
Notify Me®
[]