Beaux Arts Style
The Dubuque County Courthouse is an example of the Beaux Arts Style, named after the Ecole des Beaux-Arts in Paris, where many prominent U.S. architects studied at the turn of the century. The courthouse was designed by Fridolin Heer & Son. The building is 88 feet by 125 feet in size.

Central Tower
A 190 foot high central tower is capped with a fourteen-foot-tall bronze statue of Lady Justice. Several other statues were taken down during World War I and melted to provide material for the war effort, but some allegorical pewter figures still remain. A variety of stone finishes were used in the construction, along with colossal columns often found in groups of two, elaborate moldings and great amount of detail.

Renovations
Over the years a number of renovations have been done. In the 1980s, a five story glass encased elevator - one of the few glass-walled elevators in Dubuque - was installed and ground floor entrances were added on Central Avenue. A granite fountain was also placed on the third floor and plaster was removed from the ground floor interior walls to expose the original brick.

A gold leaf coat was added to the dome on the central tower. These renovations cost $74,500. The initial application of gold leafing did not hold up well under weather conditions, so in recent years the dome has been releafed. The County courthouse was the first building in Dubuque to be added to the National Register of Historic Places. 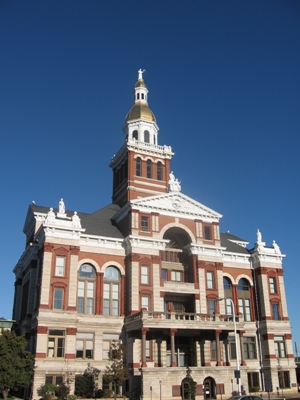