John Francis Rague
The County Jail was built in 1857-58 at a cost of $40,000, during the financial depression of 1857; designed and supervised by Midwest architect, John Francis Rague (1799-1877). Rague is primarily noted as the architect of the former State Capitol at Springfield, Illinois, and the former State Capitol at Iowa City, Iowa. The Old Jail is one of only three surviving Egyptian Revivalist buildings in the nation.

Construction
It is built of gray limestone (making the walls 18 inches thick) and cast iron was used for window and door frames and decorative columns.

A two story square section provided living quarters for the sheriff's family. In between the family's quarters and the county courthouse the actual jail was constructed. Three tiers of cells were located along the eastern wall with a catwalk used to reach the upper cells.

A cell block in the curved-ceiling basement was used to hold Confederate prisoners during the civil war. It was later used for prisoners who caused trouble in the upper cells.

In 1874, six cells were added for juveniles and women prisoners. In 1971, the building ceased to be used as a jail. In 1975, the Dubuque Art Association leased and rented the building for use as a Museum, even while some areas of the building still housed the county's juvenile probation offices. 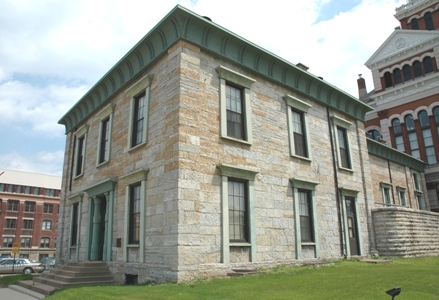 Location: 36 W. 8th Street
Year Constructed: 1857-58
Architect: John Francis Rague
Style: Egyptian Revival
Date listed on National Register of Historic Places: June 27, 1972
Date listed as a National Historic Landmark: May 28, 1978
Dubuque Art Association
In 1983, the Dubuque County Supervisors agreed to lease the building to the Dubuque Art Association for the next twenty years. From the Association's first show in 1874 until leasing the Old Jail in 1975, the Association had not had a gallery of its own.

When the Association's lease of the Old Jail expired in 2003, they decided to move to a remodeled bank building in the modern style on Washington Park. Since then, The Old Jail Museum has been operated by DCHS and displays some of the Society's most unique and interesting artifacts.

Cultural Monument
The structure is an outstanding example of the Egyptian Revival style; it exemplifies the antebellum penal reform movement in the United States. The stylistic rarity and its intrinsic architectural merit make the Dubuque County Jail a highly significant cultural monument to America’s architectural history.
Report a Concern
Make a Payment
Contact Us
Notify Me®
[]