Architectural Influences
This mid-Victorian house brings together a variety of architectural influences in a building of cleanly-dressed ashlar. Its symmetrical main block is square, 2 ½ stories high. The hipped roof of slate is topped with an octagonal belvedere with windows on each side. Four small gabled dormers, later additions, are centered on each ridge. Two brick chimneys are also later additions. Paired bracketing on the house cornice is repeated on the belvedere.

The side porch, with its Tudor style wooden arches, is supported by octagonal columns, the whole painted white. The Tudor arch is repeated on the front porch, but is flanked by narrower rounded arches of Romanesque style. Both porches originally had iron railings on the roofs. Romanesque influence is also found in the colored leaded glass fanlight over the double front door, the latter having grooved colonnettes on each side. The double windows are simple 4/4 sashes, painted white, with broad, cornice stone lintels and stone sills.

Interior
The interior has 16 rooms, with 14’ ceilings featuring plaster rosettes and moldings. The original flooring is 6” pine, the stair rails, newel posts and spindles are of walnut. Interior window shutters fold into the casements. Minor alterations, including the closing of fireplaces and maple flooring on the first floor, were made by the WPA in the 1930’s. 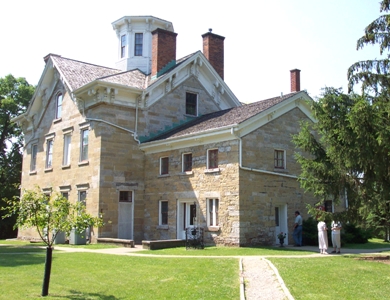 Location: 2241 Lincoln Ave.
Year Constructed: Original 1839, Addition 1857, Side Porch 1940
Architect: John Francis Rague
Builder:  Mathias Ham
Style: Antebellum (Residential)
Date listed on National Register of Historic Places: July 19, 1976
Additions
This large portion of the structure is actually a later addition (1857) to a much simpler farmhouse constructed in 1839. The original, 6-room house (at the rear of the later addition) is also of limestone, from Nauvoo, with a gable roof and simple paired bracketing on the cornice. The cornice and slate roof were probably added at the time of the 1857 addition. A side porch was added around 1940 to the angle between the two sections.

The Mathias Ham House is a fine example of large, antebellum residential architecture, and reflects a popular enthusiasm for a rather eclectic architectural style. The contrasts between the earlier and later sections reflect the improving fortunes of Mathias Ham, an early Dubuque settler with a wide variety of interests. During his lifetime, he was a farmer, lumberman, brick maker and shipper, as well as participating actively in the social and political events of Dubuque.
Report a Concern
Make a Payment
Contact Us
Notify Me®
[]