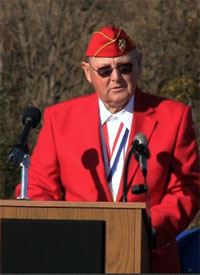 
Dubuque resident, Louis Kartman, a former U.S. Marine who survived the Korean War and the famous “Frozen Chosin” Reservoir battle, wanted his city to have a veterans memorial – and now it does.

Kartman thought if Cuba City, Wisconsin had a veterans memorial as does Ryan, Iowa, and Park Rapids, Minnesota, why not Dubuque? For more than 40 summers, Kartman has fished in the Park Rapids, area in northern Minnesota. He was talking to a fellow former Marine who spoke admiringly of the “All Veterans Memorial” that sits along U.S. 71 on that city’s south side. “He said I had to see it,” Kartman said. They’re proud of it.” 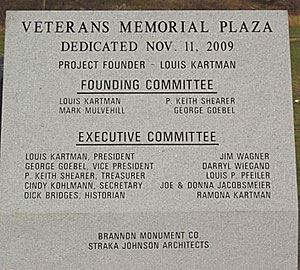 Park Rapids’ memorial is highlighted with 11 granite markers all of America’s conflicts, beginning with the Revolutionary War through the first Gulf War. The markers are inscribed with the war’s dates, those who served, those killed in action and prisoners of war. Another was planned for the ongoing Iraq War. High-flying flags represent each military service branch. “You wouldn’t believe the amount of men who come in and tell us how tearful it is,” said Lezli Zimmerman, administrative assistant for the Park Rapids Chamber of Commerce.

Kartman didn’t tear up, but he was impressed. He thought if Park Rapids, with a population of 3,900 (it quadruples in the summer), can build a monumental memorial, so can Dubuque. He began garnering support for the project in Dubuque in late 2006, and it gained momentum – finding enthusiasm from local veteran’s organizations and the general public. Dubuque city administrators agreed to be a partner on the project as well. With Dubuque City Council approval, the project was planned for city land next to the relocated Chaplain Schmitt Memorial, at the McAleece Sports Complex on Chaplain Schmitt Island.
“The City of Dubuque did not have a memorial that is this complete,” said Kartman of the planned display of granite pillars and walls with flags flying overhead. The display was planned to recognize American conflicts form the War of Independence to Iraq and Afghanistan – 12 wars in all. “This memorial is more of a history for those who visit, to see all the ward,” Kartman said.


Ground was “officially” broken on the Veterans Memorial Plaza at approximately 3:33 p.m., Wednesday, August 15, 2007. Dubuque Mayor Roy Buol gave the keynote address at the ground breaking, telling those present that the City of Dubuque was a proud partner in a project that recognizes the contributions and sacrifices of our veterans. “We extend our appreciation to the veterans who initiated the project; who brought the plan to the city council’s attention, and through whose commitment this vision became a reality” said Mayor Buol. 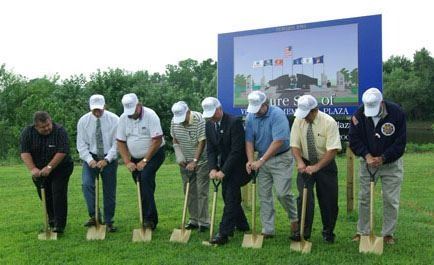 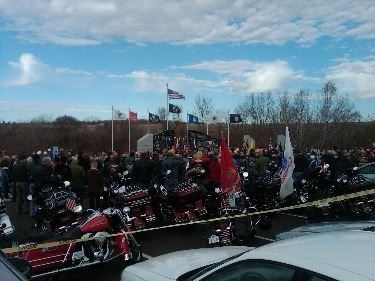 Just a little over two years from the ground breaking, the dream became a reality. Over $500,000 was raised from paver sales, sponsorships, grants and donations for the first phase. The ribbon was cut on Veterans Day, November 11, 2009. Close to 2,500 attended the opening of the memorial with representation at the ribbon cutting from federal, state, county and local government as well as many veterans groups and interested citizens. The project would not have been possible without all of the support. Veterans Memorial Plaza 501(c)(3)  organization and Board led the continued development of the site.

In August 2008 the City Council approved the Veterans Memorial Plaza organization’s request to place a Cobra Helicopter at the Plaza. The City agreed to assume all responsibility for the upkeep and safety of the helicopter.

On August 16, 2010 the City of Dubuque agreed to assume responsibility for upkeep of the Plaza with the improvements to date including but not limited to the lighting and flags. In December 2017 the Board disbanded and turned continued operations over to the City of Dubuque Park Division.  "The Board and City established a trust fund that will support the perpetual care and future development of the memorial.  We are confident that the City will continue the growth of the memorial" - Dick Bridges, Former President Veterans' Memorial Plaza.
Report a Concern
Make a Payment
Contact Us
Notify Me®
[]