The City Council approved commencement of the Phase 2A Study from Conventions Sports and Leisure International (CSL) and Betsch Associates May 20, 2019. This study includes a deep dive into 2 additional scenarios.

Scenario 3 represented a renovated complex with an expanded arena. This Scenario keeps the wall between the promenade and the current arena, removes the roof and raises the roof as well as expanding the arena across 5th Street. The arena would remain in its current east/west configuration and be a U-shape arena. It was agreed that should any critical flaws related to Scenario 3 be uncovered initially during subsequent planning work outlined, the City would have the opportunity to cease work on this scenario.

CSL and Betsch Associates prioritized the study of Scenario 3. The Phase 2A Study outlines and visually shows through rendering the flaws that do exist in Scenario 3. There is not one fatal flaw however a multitude of flaws exist. A comparison chart was prepared (page 11) showing Scenario 3 compared with Scenario 4 on a variety of issues. The issues outlined relate back to the findings of the first study and market analysis (Assessment and Study Regarding the Future of Five Flags Civic Center – June 19, 2018).

Scenario 3 when compared with Scenario 4 (Phase 2 Planning for Expanded and Improved Five Flags Civic Center – December 12, 2018) has poor performance on 8 of 10 issues. Scenario 3 has an estimated savings range of $15.27 million however has an ongoing operating deficit estimated at this point of $756,755. This is due to the operating inefficiencies inherit in the facility design with reduction in facility square footage and lower event loads. 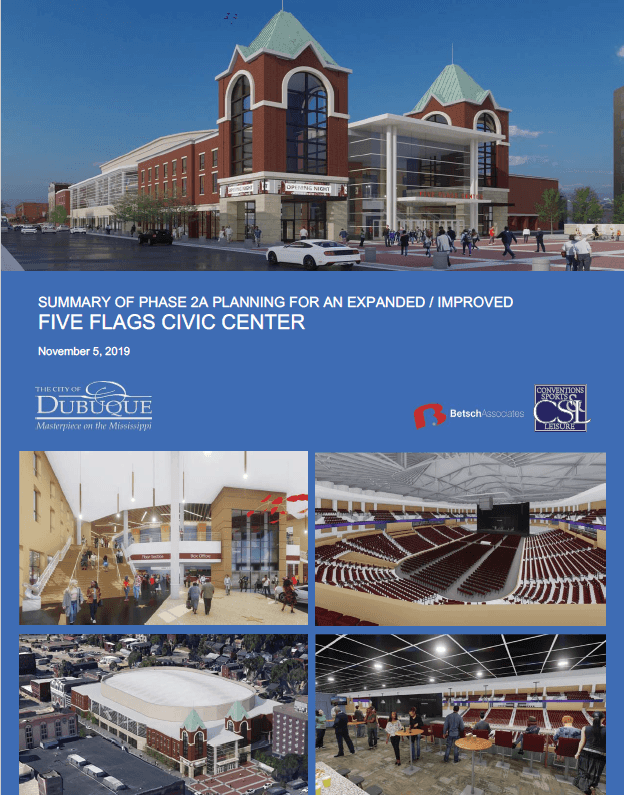 The consultants shared “Although we are saving one wall and a portion of the fixed seating in the existing building to reduce the capital cost of the project, Scenario 3 has a number of functional issues which will compromise the operation and the revenue generation of this Scenario. Many of these issues are the same as those faced in the operation of the current building due to its size and configuration. While no single issue seems to constitute a “fatal flaw”, the cumulative effect of all of these conditions will result in a large expenditure for construction of a new building that will be only marginally larger in seating capacity and still have many of the same operational issues and limitations of the existing Five Flags Center. These operational inefficiencies will also result in higher operating cost for the life of the project than necessary for a new building.” Soils Analysis

The FY2020 budget approved a soils analysis as part of this study process. This was completed to understand the soils in the areas of the building expansion. Allender Butzke Engineers Inc. was hired for this specialty work.  The soil borings and laboratory testing were completed. This work included a preliminary engineering analysis and an initial geotechnical analysis to develop design options for the floor foundation and floor slab support.

Allender Butzke Engineers, Inc. coordinated with Betsch Associates regarding their findings. Ken Betsch shared that in the cost estimates of Scenario 4, they had used costs for augur cast piles. The soil analysis allowed them to research pressure routed cast piles and aggregate piers with spread footings. He reported that “these systems lend themselves better to the soils conditions and the proposed building loads and reduce project cost” and this has led to construction cost savings in the estimate.

In Scenario 4 Hybrid the arena has a fixed seat count of 4,941 which included the premium seating areas. Premium seating includes larger boxes, club seats, suites and party seats. The study also noted that there would be a seating count of 6,468 if an end concert was held or 5,001 seats for arena floor events. Premium seating areas are now an industry best standard practice that allows for premium pricing and revenue generation for facility while offering additional amenities to the guests at events and activities.